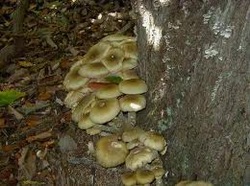 Honey mushroom also nutty but slightly sweet and tangy as well/also said smell like almonds and honey mixed Honey mushrooms get their name from the coloring and texture of their bells. Commonly
yellow-brown, the tops of the Honey mushrooms have a sticky feel when moist.

Honey mushrooms are mildly toxic if consumed raw but are edible if cooked thoroughly. The bells of the Honey mushroom can be found growing on wood, living or decaying, especially on or around the roots of downed trees.

This mushroom is very abundant. Variable in appearance, returning each year in many shapes and
colors, what we call Armillaria mellea, (also known as the "oak mushroom"), may represent more than one species of mushroom. The caps can be red-brown to tan, smooth or scaled, with tan or pale brown fibrils.

They may be small, rounded, and bell-like, or flat and fully expanded. They appear as
individuals or in troops of hundreds. They are enjoyed worldwide.The honey mushroom grows both on dead wood and on living plants. It is capable of attacking and killing many kinds of trees, especially oaks. We have seen hundreds of caps erupting in clumps from the trunk and roots of a single tree.

The mycelia of this organism may be compressed into a network of shiny black rootlike filaments called rhizomorphs, meaning "shaped like roots." These strands extend along tree trunks, under rocks, and follow roots underground searching for new food sources. For instance, they will consume all the plants
of the cabbage family they can reach.

Logs in moist forest environments may glow at night with a cool, blue-green emanation
called "fox fire." This phenomenon is caused by a chemical produced by the mycelia of the honey mushroom.This mushroom is admired in many countries of theworld for its firm meaty texture. Most recipes call for combining it with other ingredients, rather than preparing it alone. It can be substituted in any basic
recipe. Because of its dense consistency, it tolerates long cooking without losing its shape. For those people who experience a slightly bitter aftertaste, it is advised to parboil the caps for 5 minutes and to discard the
water.