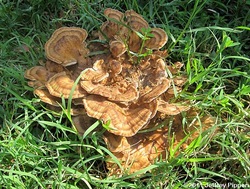 Here is a recipe for cooking

Over low heat melt a pat of butter in a cast iron skillet. As the butter melts, remove a handful of fronds from your Grifola; clean off any adhering duff or slug stuff, by hand, brush, or a stream of water. Using your fingers shred the fronds into quarter or half inch slivers.
Smash and dice a clove of fresh garlic. Put the garlic and mushroom slivers into the pan and cover. Simmer for a few minutes, stirring occasionally, during which time the mushroom slivers will give off a bit of
liquid and a great deal of aroma. Remove the mushroom from the pan leaving some of the juices behind. Put two slices of bread into the skillet, increase the heat a touch and gently pan toast the bread for another minute. Assemble the sandwich, enjoy, and kick yourself for not preparing enough for two sandwiches.
It is that good.

So-named because its appearance vaguely resembles that of a ruffled chicken, the mushroom
looks like a large mass of grey-brown spongy feathers. An alternative way to think of the mushroom's appearance is as a fungi lettuce head. Called "maitake" in Japan, hen of the woods mushrooms are often found under oak trees and can grow to gargantuan proportions. A hen of the woods weighing dozens of pounds is not uncommon; the Missouri Department of Conservation indicates they can grow up
to 100 lbs. These mushrooms are treasured both for their hefty size and what the Forager Press describes as "firm texture" and "fabulous flavor." Furthermore, these are reliable mushrooms that grow back in the same spot every year. The hen of the woods has a growing season in the summer and autumn.

Maitake's  D-fraction (a 3-branched b-1,6-glucan with aprox. 30% protein) has shown an interleukin -1 stimulating effect. This may be partially responsible for the Maitake mushroom's immune-stimulating
effect, which has been shown to shrink tumors more effectively than mitomycin-C- a chemotherapeutic drug.

Studies on rats have shown that both extracts and whole mushroom powder have significantly hypotensive, and triglyceride-lowering properties when given orally. When Maitake was added to the diet of mice with genetically produced diabetes, the levels of blood glucose
and triglycerides were reduced.

Another important therapeutic effect is being studied: A hepatoprotective effect was found in extract of Maitake, used on laboratory rats with induced hepatitis. The polysaccharides from Maitake were used in a randomized controlled clinical trial with 32 chronic hepatitis B patients. The recovery rate was reported to be 72% in the Maitake group, and 57% in the control group.

Regarding other human clinical trials, the D-fraction is being studied in medical clinics here in the U.S. for patients with breast and colorectal cancers. In a recent Chinese study, a Maitake extract
demonstrated an anticancer effect in 63 patients with lung, stomach,
hepatocellular cancers and leukemia.