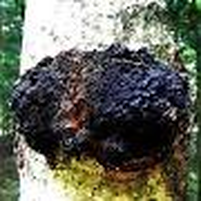 Chaga mushroom is the same just different name for the strong
immune booster with beta glucan that everyone is selling at outrageous prices it can be found here in North Carolina in higher elevations.

I know looks disgusting. A comment was made that it looks like a tumor which is ironic because it is a tumor killer. It is suppose to help build my immune system so no more allergies and weight loss fatigue stomach issues anti cancer ph balancer everything I have been looking for in one fix

Chop off all the outer parts the nasty black parts.  This gives a bitter taste the beta glucan is in the middle and has a nice
taste almost like vanilla.
The outer part is stronger and needed for people that have cancer.
Thick knife or hatchet and chip away to get to the inner part that is
orange.  That way you are not
wasting a lot of the good stuff. You can get teas for a couple of months and
make it last longer. You can reuse chaga until there is no flavor coming out
before changing to another piece.

Chaga Mushroom is a black parasitic fungus produced on the living trunks of mature
birch that resembles burnt charcoal. It causes the tree's death in 5-7 years,
and in fact, Chaga Mushroom is called "birch cancer" in Russia. The shape of the
mushroom also resembles that of cancer in the human body. Chaga Mushroom has a
bitter, coffee like flavor. Since the 16th century, Chaga Mushroom has been used
as a remedy for cancer and diseases of the digestive system, because it
stimulates the immune system and draws the life force out of tumors.